After immersing myself in Adi Newton/T.A.G.C.‘s latest work ‘Meontological Research Recording III’, which I’m writing about for Kathodik HERE, I thought I would explore the philosophy and poetics behind this work and Adi Newton‘s thought.
What better way to do so than in my usual digital chat? Assisted by the founders of the publishing house Rizosfera, Paolo Davoli and Letizia Rustichelli, who translated both my questions for Adi Newton into English and his answers into Italian, I was able to engage in an interesting and in-depth conversation with the author. I invite you to read it.

How did the music project The Anti Group / TAGC start?

The Anti Group was conceived as early as 1978 as a multimedia project working with different disciplines and media including Sound, Film, literature, Visual Art devised by A. Newton as a means to expand creative expression and enable a variable membership under the directorship of Adi Newton. A research and development project documenting its experimental work and results. The first projects conceived prior to ‘The Delivery’, a 16mm x 2 Dual projected film and soundtrack 1985, was 6 Therapeutic tape loops based on A. A. Tomatis’ work on Audio-Psycho-Phonology which was detailed in the ‘Rotogravure’, a TAG Research Journal from 1985 contains the TAG research from that period including Articles on Audio & Frequency Research Psychophysics, Audiopsychophonolgy, Cymatics & Pataphysics, articles on Automatic and Spiritual Art and Articles on Vaché and Daumal. A reissue of the ‘Rotogravure’ is being scheduled to be re-published as a new edition.

a) T.A.G.C. /’MEONTOLOGICAL RESEARCH RECORDING I’ – The original concept grew out of the initial idea of producing a series of recordings exploring different aspects of Sound and all of its associated aspects & uses throughout different cultures, times and the Psychophysical and Scientific properties. The Ideas implicated within the concept of ‘Meontology’ was Ideal as it gave us the possibilities of researching areas beyond those of conventional systems. Recording 1 is based on an abridged live version of the soundtrack for the film ‘Burning Water’, recorded February 14, 1987 in SO36, Berlin. ‘Burning Water’ develops new forms of visual expression. Inspired by the use of multiple montage techniques employed by Kenneth Anger. Each image in the Film is taken from specific occult areas, symbols and images, and up to quintuple exposures of the film i.e. five montage-levels then computer software was used to treat the entire edited film and finally achieved the results, with a film which relates directly to the subconscious levels of the mind, a kinetic Rorschach-test, an exploration of the resurgent atavistic and sentient symbolic systems, used by Austin Osman Spare. ‘Burning Water’ is an alchemical and technological enquiry into sub-states of being. A meontological visualisation beyond analytical analysis: ‘Burning Water’ 1986 / 1989. The other works on this recording were under the ‘Research Subject of Test Tones’, an exploration of the use of frequencies in sound and developed for the 2nd recording in the ‘Meontological series’. 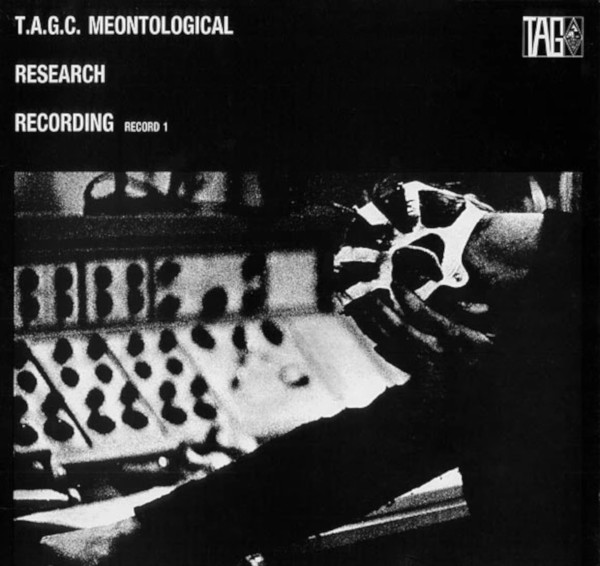 b) T.A.G.C. / ‘MEONTOLOGICAL RESEARCH RECORDINGS RECORD II / TESTE TONES’ – This recording is the sum of a work project that began in Dec 1986. Techniques devised at that stage were developed and applied exclusively to computer aided technology in both the production and construction of these recordings. On site recordings were made in Berlin and London and later processed in the research laboratory of TAGC, England, May 1988. However, the complete information can be found in the TAGC document ‘Rotogravure addition 1’, under a report entitled Threshold of the Inconceivable. This report expounds the scientific and esoteric nature of Frequencies, featuring a report from Dr. E. Jordan, Audiologist, England and Dr. G. Bérard, Audio-Psycho-Phonology center, France. 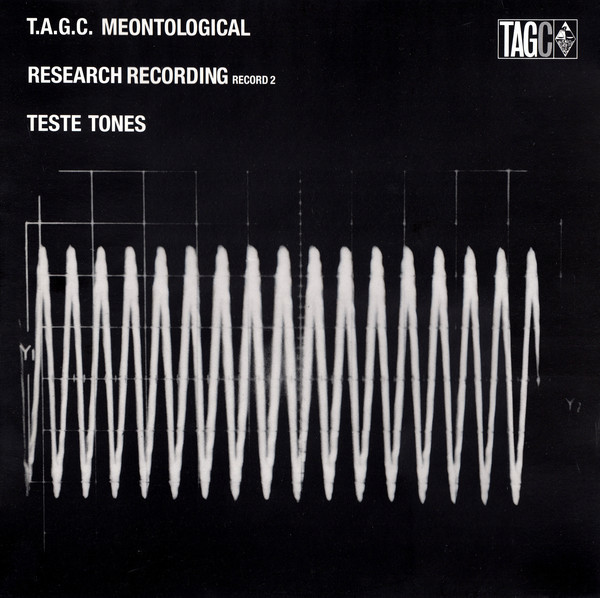 The original research began in the late 1990s and from 2010 was further developed and researched, it is a TAG Audio Visual work designed as an Immersive project which includes a specialized System of Projection of the Films. It was developed consequently to be presented using the TAGC conceptual projection staging system TAGC named as The Meon Cube, a system whereby 4 projections are simultaneously engaged to project the ìMeontological Filmsì on to a physical cube consisting of 4 semi transparent screens constructed from lightweight aluminium frames forming a equilateral square. The Cube is large enough to house in the Interior a number of TAGC personnel and computer audio generating systems while the Anterior Screen surfaces are employed for the projections. In the live context and staging the Cube is positioned with the possibility of a 360 degree field along with the Ambisonic sound reinforcement (specially developed for TAGC by Maurizio TeZ Martinucci, also a member of Clock Dva) so that the Audience can audition and gain a full 360 degree Audio & Visual immersive experience. The semi transparent screens also act as a way of enabling the audience to partially observe the members of The Anti Group within, so the sense of live performance is still maintained, further it is also possible to experience a series of continually changing montage images as the viewer moves position within the field experiencing the full effect of what TAGC described as the Meontage. The first staging of ‘Meontological Research Recording 3’ utilizing the Cube was presented in the Pantheon Leipzig (D) at the WGT on the 10th of June 2010 and then also staged at Incubate Sept 22nd 2013 at Theater De Nieuwe Vorst, Tilburg (NL). I met with Rizosfera in 2017 in Firenze, although we had some former association in the early 90s when some live presentations were organised and Publications released by their former organisation (Kom-Fut Manifesto). They asked me if I would be interested in doing a re-model of 2 tracks from the Obsolete Capitalism album ‘Chaos Sive Natura’, for a series of 12 inch 45 vinyl PROJECTS. This resulted about a year later (2018) in the edition ‘Chaos Variation III’ / Obsolete Capitalism and Adi Newton / TAG. Rizosfera later expressed an interest in manufacturing and releasing ‘Meon III Book’ and USB and other TAG projects so we started a very Symbiotic relationship dedicated to making artisan releases. 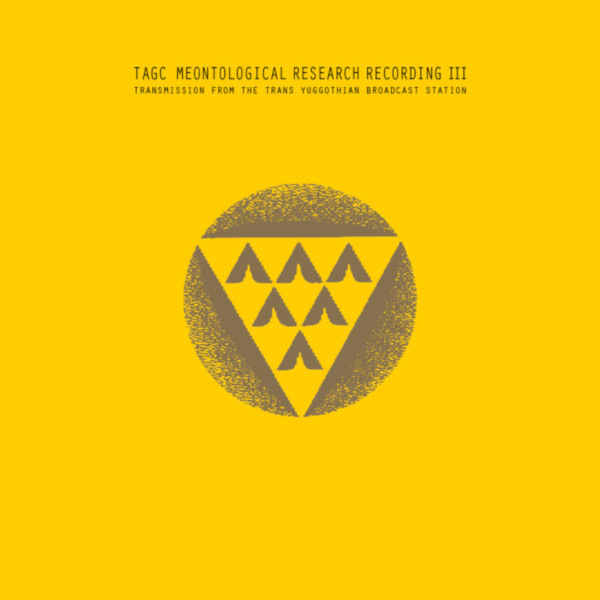 The volume ‘Meontological Research Recording III’ is huge: there are some essays by important scholars of esotericism, fascinating charming illustrations of medieval bestiaries, as well as music and technology in the attached USB CARD. How does all this explain your research and how can it influence the listener?

For ‘Meon Recording III’ TAGC have researched areas of outsider science and Pataphysical ideas derived from Alfred Jarry a priori epiphenomenal science & also explores some of the central Meontological ideas based on the occult technology pioneered by Micheal Bertiaux’s work in La Couleuvre Noire also Kenneth Grant’s Cult of Lam and those of Jack Whiteside Marvel Parsons and Marjorie Cameron and also explores new developments of Voudon Gnosticism and the implicit science that exists behind esoterics. The Michael Bertiaux piece Meontographical Cartography is a direct collaborative Film / audio piece based on the original Paintings and Drawings by Michael Bertiaux from his older works and exclusively from his new works from ‘Vudu Cartography’, also paintings and Drawings by Alfred Jarry. This Long awaited third recording in the ‘Meon Series’ features collaborative contributions from Michael Bertiaux, David Beth, La Société Voudon Gnostique & Barry William Hale, based around his book ‘Legion 49’ and additional ideas from Teratological and Pataphysical concepts. The ‘Meon 3 Book’ is Illustrated throughout and features an in depth Article for each of the Audio Visual pieces with Introduction by David Beth & original Articles By Barry William Hale, Adi Newton and other writers. Each Audio piece is synchronised to a visual Invocation. The Recordings use Biological radio recordings and Earth radio transmissions & ELF information, the Films employ multiple montage and image manipulation. (…) A high Definition fixed camera was used alongside a roaming hand held High Definition camera on both occasions (Leipzig and Tilburg). The Leipzig recording has been edited and post produced and is included in the USB Smart Card that accompanies the Book. The individual Films are also included as well as the audio tracks.

The last track of the work is a live recording of ‘Meontological Research Recording III’ at the WGT festival in 2011. How did the idea of the transparent cube come about? Why have you chosen a cube as a stage form? (Photos of T.A.G.C. at the Incubate festival in Tilburg, The Netherlands, in the 2013, by Marcus Moonen)

The Cube was devised as a method of expanding the visual possibilities of live presentation for the MEON material as well as for the The Anti Group to be free of the focus of the Audience to enable the generation of live music without the Anti Group being overly visible so that the visual and Audio presentation can be focused upon and also the live interaction of the musician can be felt without it being a focus, so the Cube acts as a perfect solution and a way in which the Anti Group can perform live music and present the visualisation as the screens on all four sides are slightly transparent and this allows the montage of images to occur during live presentation. As described in the above it acts as a means to do a very audio visual performance. The Limitation is site specific and acquires the necessary distances and space in order to set up the cube. Ideally it also requires a base / platform on which to raise the cube so the audience has a better viewing experience. 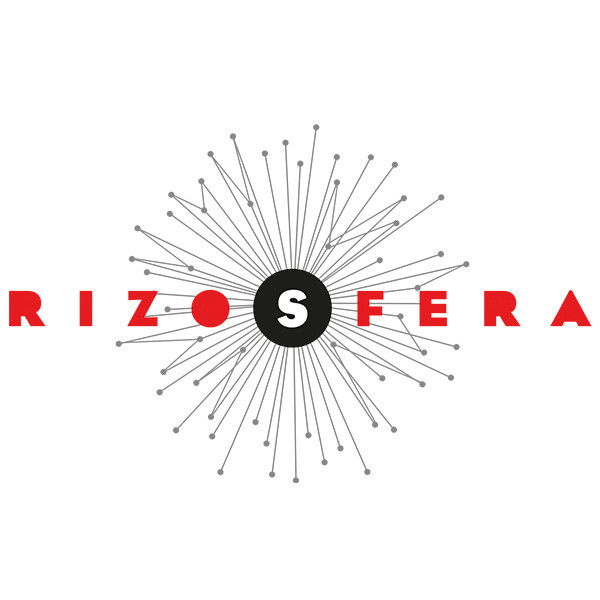 The trilogy seems to end with the ‘Meontological Research Recording III’ project. How will The Anti Group / TAGC research continue?

The release of the ‘Meon III’ book does not conclude that further releases in the series will be made, in fact we are already with Rizosfera looking at the production of a combined edition of remastered ‘MEONTOLOGICAL RESEARCH RECORDINGS 1/2 COMPLETE COLLECTED WORKS’ and TAGC ‘DIGITARIA / COMPLETE SESSIONS’ will be a Document and 96 kHz Ambisonic master. Both new releases will have all the additional never released and very experimental material recorded on those projects during the sessions / period 1985 / 6 /7 / 8, it will come with a Extensive Research Document collected at that time regarding Psychophysical and Physiological sound research, also films used in Live ‘TAG PERFORMANCES’ which have never been released or available, the original Audio files from Magnetic Analog Masters and FM recordings will be used on the new Master.